Week Two of the Belmayne Breaktime Chess Tournament kicked off and it did not
disappoint!
The first game was Miguel vs Victor and it was an intense game to say the least, both
players constantly putting each other in check. Miguel played the one chess move that
Netflix lovers know so well, that’s right he played The Queen’s Gambit. This magnificent
move gave Miguel The Crown (another one for the Netflix lovers).
Meanwhile, on the other side of the room, a match between Páidí and Rowan had just gotten
underway. Páidí worked hard for this as Rowan tried to keep him at bay but sadly for Rowan
it came to a close when Páidí locked him in a checkmate!
Whilst all this drama was unfolding, a game was also in play between Nine and Morgana.
Nine kicked off the game with a Pawn to E4 move, otherwise known as The King’s Pawn
Strategy. This is the second most popular move, just behind The Queen’s Pawn Strategy.
However, there was no winner as the bell rang, rematch perhaps?

That’s all for this week’s Belmayne Breaktime Chess Tournament. Come back next Thursday
for more of the tournament.

~ Finn
“A computer once beat me at chess, but it was no match for me at kickboxing” – Emo Philips

Today, Thursday 27th Jan, Belmayne ETSS played in a basketball match against Scoil Chaitríona . Our first years won the first match, however our second years sadly lost the
second match. Everyone played great and did their best. Well done for representing the
school.

Today here at Belmayne ETSS, the Breaktime Chess Tournament commenced! With 14
players, 10 minutes on the timer and 7 games to play, it was about to begin.

The first win of the tournament went to Victor who managed to checkmate his opponent
within 1 minute, using strong offensive tactics to take the crown.

Meanwhile, over the other side of the room there were rook-ie mistakes being made, as
people were having trouble actually starting the matches on their iPads. In this time of crisis
opponents had no choice but to join forces with one another and sort out this tech-tastrophe!

Simultaneously, another match had just begun between Conor W. and Páidí. Conor began
the game using the Amar opening, which can also be called the Paris opening, involving
moving your right Knight to H3.

Sadly though, no winner was announced as the bell went.

That’s all for now on the Belmayne Breaktime Chess Tournament for today, but be sure to
check back in next week, when the tournament will really get under way.
Remember, life is like a game of chess. You cannot undo the moves, but you can make the
next step better!

On Wednesday, 19/1/22, the first years of Belmayne ETSS travelled to the Energy Theatre to watch the spectacular presentation of The Lion King. The trip went very successfully, the students enjoyed it and look forward to future school trips. – Morgana 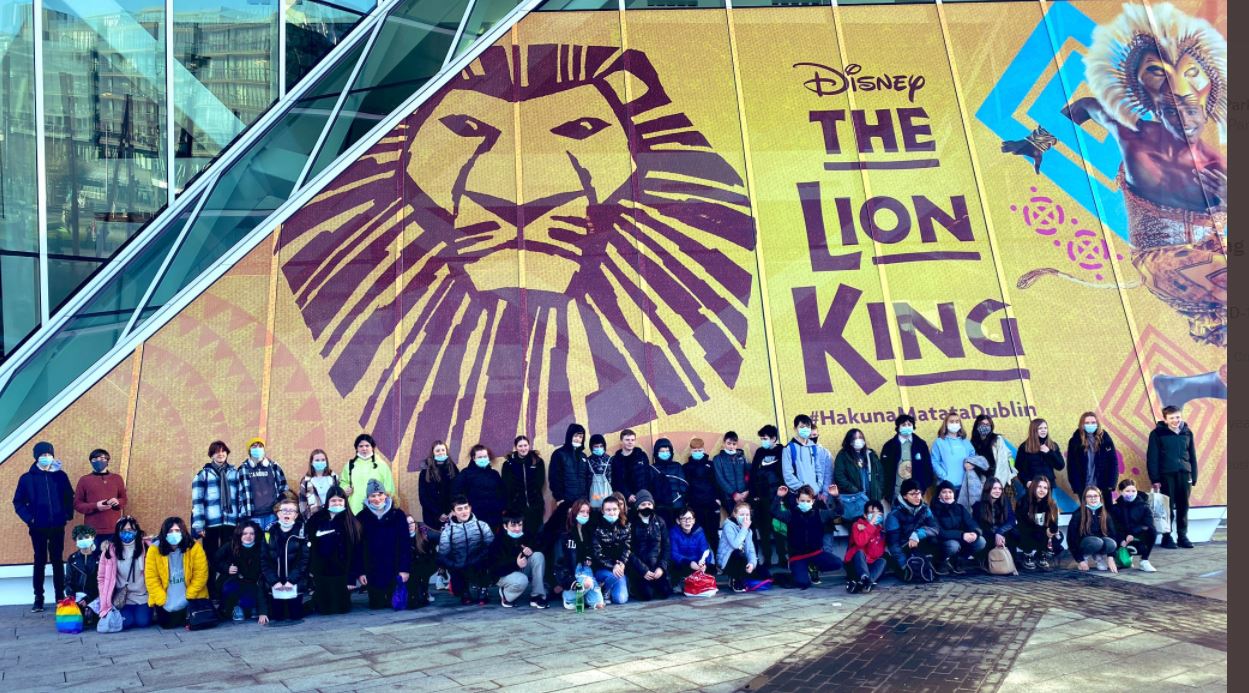 Today during Ethical Ed, students decorated their base classroom’s door with recycled Christmas decorations. The aim is to give the school a Christmasy touch while still being ecological.

The whole school had been waiting patiently for the 18th of November as it marked the second Acoustic Picnic. You could feel the excitement that beckoned around the school as the first Acoustic Picnic had left the audience in awe of the talent within Belmayne ETSS.

This concert did not disappoint and certainly brightened up the month of November.

The concert featured nine talented performers with compelling acts ranging from poetry to rock and roll, giving everyone something to enjoy. The event kicked off with Miguel and Tammy (both returning acts) performing ‘Hey Soul Sister’. Tammy’s elegant voice was pitch perfect accompanied by Miguel’s precise piano playing which perfectly complemented the song. They certainly started the concert on a high as the crowd were already loving it. Next up was Kaelan with the first Earth Day poem of the concert, written by himself! He recited the poem confidently whilst spreading the message of Earth Day and allowing the crowd to reflect on the true value of our planet. Kaelan was followed by Vinayak who performed Mozart’s ‘Sonata in G major’, once again showing his brilliance on the piano and how to truly master an instrument. Next up was Jack who performed ‘Nothing Else Matters’ by Metallica. He performed with class and made a tricky song look easy. Tara was up next, reciting the second poem of the event. She spoke with pride and spread an important message that we all needed to hear. Next was Yeira who performed ‘Believer’ by the Imagine Dragons on the piano. Every note was perfect and had the audience bobbing their heads along to this catchy song. Matt then performed ‘Shallow’ from A Star is Born- it sounded brilliant, with his strong guitar playing and great voice he really perfected his performance. The concert was coming to an end, the distant sound of the school bell was looming in the air, however there was one more act. Matt, Vinayak and Nayan ended the concert with their rendition of ‘Stairway to Heaven’ by Led Zeppelin. They were all in harmony and even gave Led Zeppelin a run for their money!
This rounded off another successful Acoustic Picnic, with students raring for the Winter showcase on 16th December which is most certainly going to amaze the school once again with the talent that oozes from Belmayne ETSS. – Jack Winkless 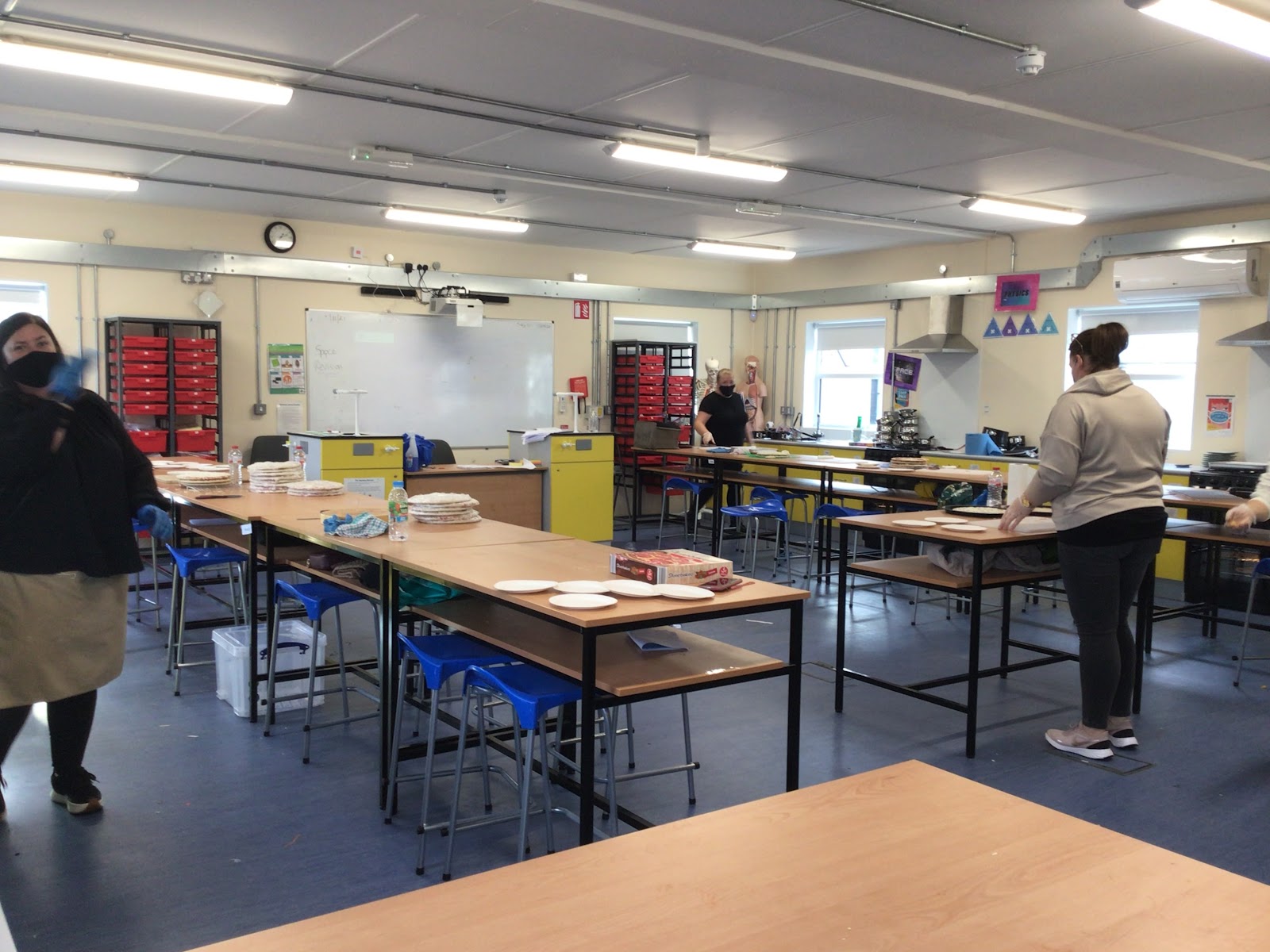 Our school’s football team gave an outstanding performance against Cabra, with a 2 goal cushion at fulltime, in large thanks to a hatrick by one of our fantastic midfielders. This was our second game in the cup and our first win. The team is motivated to win more and are excited for the next match!…(Ousmane – 3 Thunberg)

Today Belmayne ETSS went for wellbeing trip to the mountains of Wicklow. First and Third year Classes went to Glendalough while Second Year classes went on a trip to Crone’s Woods near Enniskerry. It was a great experience and the weather was fine for most of the
day. The scenery was breathtaking and the walk was wonderful. Covid permitting we hope to go on further and longer trips in the new year

The air was filled with electric anticipation on the morning of Thursday October 21st, as this day marked the first Acoustic Picnic in Belmayne ETSS’s history. An eclectic group of talented musicians assembled to perform. The gig included a variety of performances including breathtaking piano pieces, compelling solo acts and a heartwarming duo. This event featured talented musicians who were ready to put on a show and put everything into their performance.

The show opened with Miguel on the piano performing a sea shanty. He gave a brilliant, energetic rendition of the song, the crowd loved it! His performance was followed by Vinayak who played a beautiful classical piece, Bach’s Prelude in D minor on the piano which had the crowd amazed by his virtuosity. Matt McCarthy was up next performing his version of Tears in Heaven by Eric Clapton- his combination of singing and guitar playing perfectly conveyed the emotion of the song whilst grabbing the crowd’s attention. Nayan followed Matt’s performance with his piece on the trumpet, it was note perfect and had the crowd humming along. This led to the closing performance of the concert with Jack and Tammy, two of our 3rd Year music students, performing their duet of Blackbird by the Beatles. With Jack displaying a gentle finger picking style on the guitar and Tammy with sweet vocals, their performance wowed the crowd and finished the concert on a high.

With 20 plus students in attendance (and more listening outside the window!) the show was a success, it was the talk of the school the following day. Belmayne ETSS is full of talent and only a small part of it was showcased at the Acoustic Picnic. The next lunchtime concert takes place on the 18th of November and it just can’t come fast enough. (…Jack Winkless)

There was a buzz about the place Friday morning, everyone was looking forward to our first school event of 2020.

6 teams and all to play for. There was cricket, rugby, rounders, football, relay races and experts on hand to give some sound advice to our budding players.

There was a great atmosphere, shoes fell off while jumping high, falls and bumps and epic tackles. Ita and Fiona went head to head in the sprint walking – Fiona “won” but her win was surrounded by allegations of cheating (bit of running thrown in), without VAR we’ll agree to call it a draw!

The day was finished off with an ice cream and everyone went home exhausted but happy.